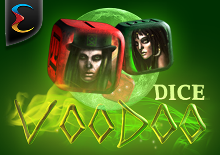 4/5 (401)
Voodoo Dice is a hypnotizing 5-reel, 3 row slot, which will take you on a journey to the mysterious world of Voodoo magic and spells by its supernatural feel and enchanting sounds - newly represented as symbols on the dice.

There is much to say about the dark atmosphere around Voodoo. Apart from the voodoo dolls that weve been familiarised with from films, voodoo also represents a religion in itself that originates in Africa. This is where the magic and tales all began. When you dare to play the game with these spirits, youâ€™ll meet the Voodoo man and woman along with a snake, leopard, doll, and raven. These symbols all carry a hidden special power that youâ€™ll see for yourself if you roll them on the dice.

In Voodoo Dice, the most important symbol is a Voodoo man that acts as Wild and Scatter, it substitutes for all symbols and triggers Free games feature when 3 Scatters appear on the reels, 10 more free games can be won again during the feature. Any symbols at the winning combination will expand to cover the entire reel during the Free games feature.
Débloquez plus de 2000 jeux premium avec un bonus $200  ! Obtenez un bonus