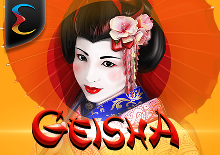 5/5 (878)
Geisha slot, named after the famous Japanese artists of the floating world, is your ticket for a trip to the land of the rising sun. And its mysterious and elegant universe has a few surprises in store as well.
Geisha is obviously set in traditional Japan and, as such, you should expect a lot of beauty and refinement. Ink-painted cherry trees in blossoms constitute the background, with actual pink petals gently blowing across the screen as you play.

The reels are topped by a black tile roof and separated by bamboo frames. The overall tone is sepia and brown, evoking nature and tranquillity. The music playing is traditional as well, calm but perfectly fitting for the theme.
The traditional Japanese footwear or Geta, coins, oil-paper umbrellas and shamisen are all part of the low-pay symbols. In addition to them, there are three Geishas, which award up to 800 coins, granted that you play one coin per line.

The Koi fish symbol is Wild and substitutes all icons except the Temple, which pays scattered. For five Koi Fish you win up to 40x the total stake. However, Temple pays 5x more than that and triggers the one and only bonus feature that appears in the Geisha video slot.

The Free Games feature is triggered with 10 initial free spins and very special Geisha symbols that come with x1, x2 and x3 multipliers. During the feature more free games can be won in exchange for temples for even longer rounds of play. You can double your win in the Risk game.

Try out Geisha from Endorphina and you will be blown away by the coolness of this game!